The texts were rolling in by the dozen and they were covered in pink glaze, chocolate drizzles and multi-colored sprinkles.  There was only one other person more excited to see homemade doughnuts being made in the Thyme & Temp kitchens  than me and that was Jane.  She had finally  procured a mini doughnut pan and immediately slid into a sugar coated rabbit hole of non-stop doughnut making madness.

She had mentioned how much she wanted the pan several times during the preceding weeks, and we were planning to have a full-on doughnut weekend once she received it, but I was in no way prepared for the machine like frenzy she would display in preparation.  I’m not sure how many donuts she made that first day, mainly because no one alive can count that high, but it seemed like everyone within a two mile radius received a batch.  By the time we made it to the weekend, she was a pro, and I was possibly the luckiest person on the planet.

The great thing about doughnuts is how you can dress them up in any way and with any flavor.  We wanted to stay basic for the first go around, and stick to the standard white buttermilk cake donut, but we also wanted have fun with the decorations.  Armed with pistachios, chocolate chips, a wide array of sprinkles, and the classic four pack of food coloring, we were set for attack and Jane hit the bullseye every time.  The recipe she used is listed at the bottom of the page.

Not wanting to just sit there and watch while Jane did all the work, I decided that I would try a cruller.  The French Cruller has always been my favorite, its crisp outside, the airy inside.  It’s always seemed so refined to me compared to the other “alternative” doughnuts.  Like you’re eating a true pastry.

To me, the standard doughnuts are yeast and cake.  Then you move into the alternative category which is where you’ll find the sour cream variety, the strange brown lumpy one I’ve always been too afraid of to find out just what it is, and ultimately, the cruller.  Holes don’t count, they’re just little yeast teasers.  Ah, but the cruller is like the Aston Martin compared to the others.  It has style, curves, and I was quite convinced, would be entirely fussy to make.  I was wrong.  The recipe is listed below but here’s a link to the one I found on Food Network’s site, Crullers.

For the glaze, I simply added the juice from half an orange to the basic mix. See below for the basic glaze recipe we used for the base of both the crullers and doughnuts.

Despite the obvious rookie handling of the pastry bag and star attachment, we were both happy with the result.  Helpful hint: After you squeeze the raw dough on to the wax paper, put them in the freezer for about 15-20 minutes.  It makes them a lot easier to handle.

Doughnut weekend (week for Jane) was a success in our book.  We had a blast making them and look forward to making them in the future.  I have a feeling that the mini doughnuts will likely find a way on the table for our next party.

Sourced from Family Fresh Meals. Check out her blog!

Preheat oven to 425 F. In a large mixing bowl, sift together (or stir with a whisk), flour, sugar, baking powder and salt.

Scoop batter into a large ziplock style bag, or large piping bag and snip off the tip to fill doughnut pan.

Fill each doughnut cup approximately ⅓- 1/2 full. The batter will rise quite a bit during baking. Bake 5-7 minutes or until the top of the doughnuts spring back when touched. Cool in pan 1-2 minutes, then transfer to a cooling rack.

In a small bowl, stir together sugar, milk and extract until sugar is completely dissolved.

Use immediately to glaze doughnuts. Dip each donut in glaze, then set on a plate.

Here they are after 1 coat. I did 2 coats per donut. Top with sprinkles while still wet.

Combine the water, butter, sugar, and salt in a large saucepan and bring to a rolling boil over medium-high heat. Reduce the heat to moderate. Add the flour all at once and stir vigorously with a wooden spoon until a tight dough forms and pulls away from the side of the pan, 2 minutes. Remove the pan from the heat.

Scrape the mixture into a standing mixer fitted with a paddle attachment and mix at medium speed. With the mixer running, and adding 1 egg at a time, add 3 of the eggs. Mix until the eggs are completely incorporated. The dough should be thick, but should fall slowly and steadily from the beaters when you lift them out of the bowl. If the dough is still clinging to the beaters, add another egg and mix until completely incorporated.

Line a sheet pan with parchment paper. Using a pastry bag (or the make-shift freezer bag version) fitted with a large star tip, pipe the dough onto the sheet pan in rows of 2 1/2-inch rings. Place them in freezer for 30 minutes to make them easier to handle and hold shape while adding to the oil.

Pour the vegetable oil into a large pot to a depth of 2 inches and heat to 325 degrees F. Working in batches, lift the dough circles off the sheet pan and carefully slip them into the oil. Fry, turning once, until lightly browned. Drain the crullers on a cooling rack with a paper bag underneath to catch the drippings.

While still warm, spoon glaze over crullers until covered. Again, allowing the bag to catch the excess.  Allow a few moments to set and then serve. 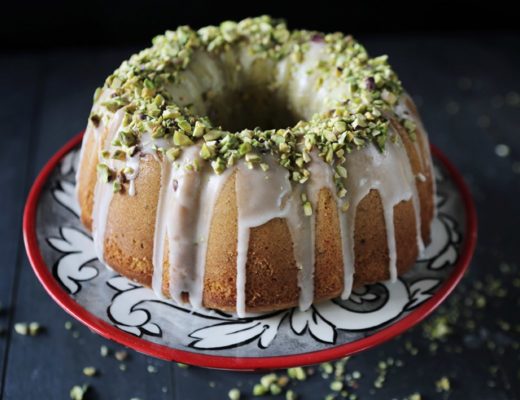 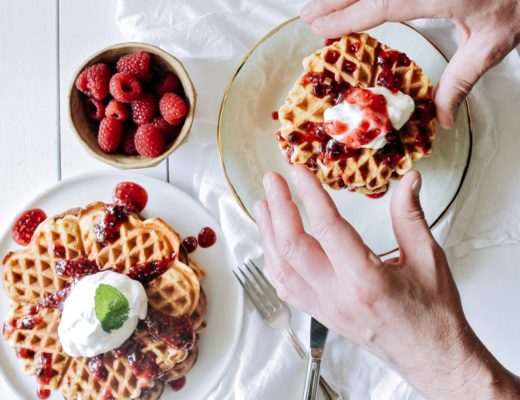 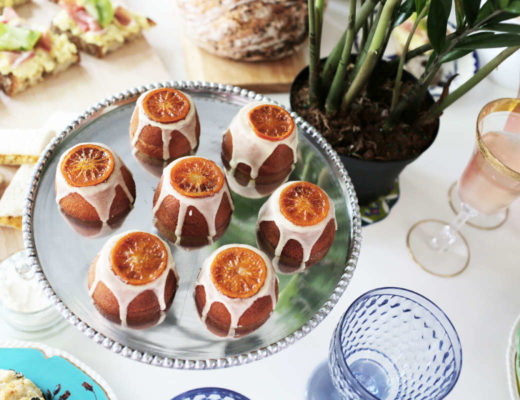