I wanted to hear the sounds of footsteps walking through fallen leaves the moment Jane and I stepped off of the plane in Dallas last Friday.  The cool autumnal air had us reaching for the jackets we barely needed in New York City and I was excited to make it back home to my neighborhood where I could swear a hundred chimneys were already blanketing the rooftops with smoke.  We had anticipated a tease of fall during our stay up north but their late summer sun kept the gray at bay and sent it south to meet us back in Texas.

It was perfect timing.  Our minds had been peeking sideways towards the latter months for weeks and we were in no short of a hurry to get there.  Despite New York’s slightly warmer than expected temperatures, it was still cool enough of a change at night to keep us looking forward with thoughts of all the wonderfully cozy meals and cocktails we could enjoy, and ultimately use for inspiration when we returned home.  We found that spark in the darkest of places.

Death & Company, located in the East Village, must save a fortune on their electric bill. Now that I’m a week removed, I honestly can’t say whether or not the lights were even on.  I wouldn’t be surprised if it was lit entirely by a small collection of candles spread amongst the bar and tables.  I wanted to use my phone’s flashlight in order to read the menu but I had the distinct feeling the darkness was intentional in part to make a fool of anyone taking selfies and photographing their food.  This was a speakeasy with a true dedication to the craft of creating unique spirits and cocktails but also creating an environment of focusing on the person(s) accompanying you, especially since they were the only person or people you could actually see.  Furthermore, it absolutely worked!  We grabbed our seats at the bar, titled the menu towards whichever source of light we could gather, and enjoyed an incredible experience.

There were many high points to this evening but the one that stands out the most is their fried biscuits stuffed with braised pork and topped delicately with a slaw that balanced it perfectly.  From the first bite, we couldn’t wait to get home and try our best to replicate it in some form or fashion.  We spent the next two days and the plane trip home deciding how we wanted to make them and what we wanted to go with it.  In the end, we wanted to change it a bit so I decided on red wine braised short ribs and a creamy polenta with sautéed mushrooms and tomatoes.  Jane chose to compliment this with the most wonderful salted honey pie.

We didn’t know what to expect when it came to frying biscuits, or if you needed to prepare the dough in a certain way to do it properly, but we figured we’d just go basic buttermilk and deep fry it like we did with the crullers back on Donut Day.  Braising the short ribs would be easy, but time consuming, and exactly what we wanted on this faux fall weekend.

The kitchen was warm all Sunday.  Scratch that, it was downright toasty!  The weather provided the ideal escape while we waited for everything to come together.  The aroma was intoxicating and my only wish was that we were preparing snacks as we went along.  Between the biscuits, the polenta, and the pie (which will be featured in another post), there was a lot of preparations but not a lot of eating along the way.  The short ribs alone take 3-4 hours to prepare and braise but it was certainly worth it.  Pulling them out of the over after two hours and opening the lid almost deserves a post of its own.  It’s truly a beautiful moment.

The short ribs were so tender and pulled apart with ease.  It took only a few minutes to have the whole lot shredded and ready for stuffing.  We drizzled the remaining liquid over it to keep it moist while we cut the biscuits.

.  It was as simple as can be and we both learned a new trick for adding butter.  He recommends freezing and shredding it while adding it to the mix.  We highly recommend it as well.

While we stuffed the biscuits, we had the oil heating up to 385 F.  Our anticipation was out of control at this point.  We were giddy!  Once every biscuit was stuffed, I grabbed a slotted spoon and began the frying process.  I added three at a time but two would probably be better.  The temperature drops too much with three and then you have to wait for it to heat back up before you add another batch. Fry the biscuits for about 3 minutes and flip for a total of 6-7. You’ll know when they’re ready. Remove and let them drain.

Once the first batch was finished, I looked at Jane who was furiously trying to clean up and set the table, and assured her that this was going exactly the way we had hoped.  It was a success!  To be honest, I had doubts but they were erased immediately as they rose to the top of the oil fluffy and golden.  Luckily, we had prepared the slaw earlier that day.  It was a simple mix of fennel, red cabbage, and apple.  Now it was time to pull it out and began dressing the biscuits.

This was as proud as either of us have ever been when it comes to cooking together and it was a perfect bookend to our wonderful week.  Between this and the salted honey pie, we were even more motivated to challenge ourselves in the kitchen.  Next time, we’ll try to mimic a cocktail from Death + Company to go with it.  Luckily they have a book coming out this Fall.  Be sure to check it out!

Preheat oven to 350°F. Sprinkle salt and pepper (and I add a little paprika for smokiness) over the short ribs. In a oven safe pot or Dutch Over, heat up the oil at Med-High heat. In multiple batches, brown each side of the short ribs, about 7-8 minutes, and then transfer short ribs to a plate. Pour out all but 3 tablespoons drippings.

Now add the onions, carrots, and celery to the pot and cook over medium-high heat and stir often until onions are browned, about 5-6 minutes. Add flour and tomato paste and stir until it reaches a even deep red, about 3 minutes. Still stirring, pour in the wine and add short ribs with any leftover juices. Bring this to a boil, drop the heat to medium, and simmer until wine is reduced by half, about 30 minutes. Finally, add the herbs to pot along with garlic and stir in stock. Let this come to a boil, cover, and then place in the oven.

Cook until short ribs are tender, about 2 hours. Transfer short ribs to a plate or tray and strain the sauce. Begin separating the meat from the bones and shredding with your hands. Place shredded meat in a bowl and drizzle the sauce to add flavor and keep moist.

In a large bowl mix the flour, baking powder, sugar and salt. Add the frozen butter by using the box grater method but toss after each quarter stick to coat with flour. Stir in the buttermilk using large strokes working from the bottom until you have a crumbly mix.

Dust some flour on to a working surface and gather it into a ball and knead with your palms. Now dust with more flour and roll out until you have about a quarter inch thickness. Now use your biscuit cutter to punch out the biscuits. (You will cut out tops and bottoms in order to combine and stuff the biscuit so they need to be thinner than you would normally use for baking.)

Using a 3 inch round biscuit cutter, cut out a top and a bottom per biscuit.

Place roughly a tablespoon of shredded short ribs on the bottom layer and then place the other layer on top of it, sealing the edges with your fingers. Seal it tightly. You don’t want the oil to break the seal and separate the layers.

Drop the stuffed and sealed biscuit into the oil and let it fry for approximately 3 minutes and then flip. 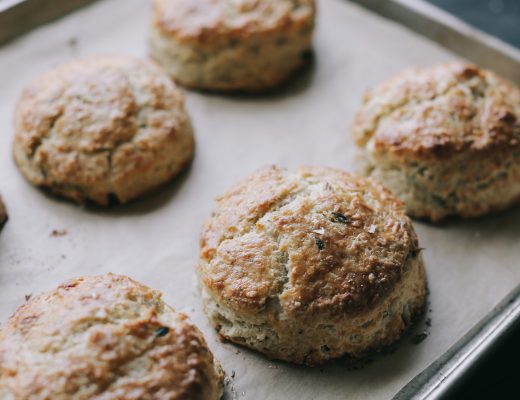